Greens Out in the Cold – Again 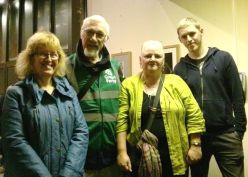 In the same week of the uproar surrounding The Green Party being left out of the plans for ‘Leaders debates’ running up to next year’s national election, local Mid Derbyshire Green Party members were left out of last night’s (15th October) Extraordinary Meeting of Amber Valley Borough Council (AVBC) at the Town Hall, Market Place, Ripley, to consider changes to the Core Strategy Local Plan.

Amber Valley Borough Council limited public attendance at the meeting to just 25, with just 20 non-council members being allowed to speak. Despite numerous requests to hold the meeting in a larger venue, over a hundred people were left outside in pouring rain for over an hour before being allowed into the entrance to the council building to hear the meeting through a speaker system.

Mid Derbyshire Green Party AVBC candidate for Belper North, Sue MacFarlane, said “Amber Valley Borough Council recognised the huge public interest in this issue, but did not hold the meeting in a venue big enough to accommodate the numbers of people who wanted to attend. Some of the submissions regarding the proposed Core Plan – including the submissions from Mid Derbyshire Green Party and Transition Belper – were initially left out of the summary document, and included too late for councillors to have sufficient time to consider them before the meeting. Green Party Policy says that democracy and accountability are vital at all levels of government and especially in local government. I don’t feel that the voices of the people of Belper were properly heard at the meeting, and I am disappointed that the plan still includes proposals to build on green field land at Bullsmoor Farm in Belper.’

Sue, together with Belper Town Council Green Party candidate for Belper North, John Devine and other Belper Greens, were at Ripley Town Hall along with members of Belper Town Council, Transition Belper, Residents Groups and other residents of Amber Valley who wanted to ensure that AVBC are aware of the depth of feeling regarding the Local Plan.

Natalie Bennett, Leader of the Green Party of England and Wales, is supporting Mid Derbyshire Greens position on this issue. Natalie is visiting Belper on November 17th to meet with our Local Green Party Candidates and their team, and to visit some of the proposed ‘Green Field’ sites. We are hoping to arrange a public meeting during Natalie’s visit to ensure that local people get a chance to speak to her about their concerns.

3 responses to “Greens Out in the Cold – Again”