During a visit to Belper on Monday, November 17th, Natalie Bennett, Leader of the Green Party of England and Wales, visited Belper School to talk to Sixth Form students.  Ms Bennett began by outlining some of the Green Party policies that she thought would be of particular interest to the students, including their policy on student fees (which would be free) and student loans (which would be ‘written off’)

As the meeting moved into a ‘Questions & Answers’ session, it was clear that the students were interested in all Green Party policies, and wanted to really get to know where the Green Party stood on a range of issues.  As Natalie said ‘You young people are the voters and leaders of the future, I want to know what you think and how you feel about the world we are living in. 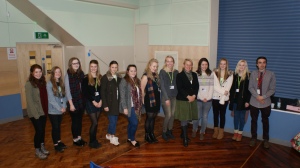 The students were so enthusiastic that the meeting ran over time, with students staying after their school day ended to talk to Ms Bennett.  Matthew Genn of the ‘Young Greens’ was also at the meeting, and talked afterwards to students who were interested in finding our more about the Green Party and how young people can get involved.  Membership of the ‘Young Greens’ has increased by over 100% in 2014, indicating that young people are feeling that the time is right to re-engage with politics.

View all posts by Julian