I am writing on a morning when the prime minister is reported to have appealed to employers to pay their workers more. As the election approaches, neo-liberal commentators who normally laud the free market are saying what a ‘shame’ it is (Allister Heath in the Daily Telegraph) that employees are not yet getting the benefit of our famously delayed economic recovery.

It’s remarkable that the free market still places such a high premium on neo-liberal notions – they have failed more than they have succeeded, most clearly in the public realm, from directory inquiries (what exactly was wrong with the old 192?) to the water and energy industries (in my freezing flat in Newcastle in 1981 I had the heating on all the time and I was paying £90 over three winter months). Nowhere is this failure more glaring than in the National Health Service.

It is a failure that has been known about for decades. Our own health service has been so good that we have been protected for years from the tragically hilarious efforts in healthcare contracting that have been afflicting other parts of the world. From ambulance chasing in America to incompetent private caterers in Bombay hospitals to contractors sucking in the resources of an entire province to keep one hospital running in Zimbabwe, privatisation in public health provision has failed the patient.

But privatisation in the NHS was largely resisted by Mrs Thatcher and afflicted mainly opticians and dentists. However organisational changes made in the 1980’s paved the way for the later reforms that arrived under John Major. On it went under Tony Blair, a nip here and a tuck there, his frankly right-wing ministers (Alan Milburn, John Hutton, and others who pocketed their rewards later from bodies serving the private health industry) doing their best to bring in private capital in the interests of ‘efficiency’ and ‘value for money’. Their efforts were huge and the results persistently disastrous. 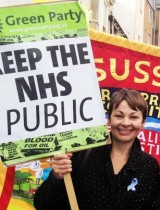 This was entirely predictable, in my view, because discrete pools of private capital looking for profit, conflict with a public health service focused on need. They can succeed only by causingdamage. This ‘private-public partnership’ reminds me of those hybrid animals you used to see in world zoos – the liger, for example, a sadly doomed mixture of a lion and a tiger, unable to live alongside any other naturally occurring animal, yet dangerous to them all.

And of course, despite his denials, it was a Labour health secretary, Andy Burnham, who left office in 2010 with a competition of three private providers (one in partnership with a trust) competing to run Hinchingbrooke Hospital. The franchise was won by Circle. The hospital then had 310 acute beds, and now has only 223. The hospital, went bust in 2007 when it had to borrow £27m to keep going. It is ‘buster’ than ever now. Private contracting has failed Hinchingbrooke Hospital. Circle has renounced its ten-year contract because the trust was about to go into special measures after it was rated ‘inadequate’, and because it was losing too much money. Fiona Allinson, head of the hospital inspection team, said after seeing the state of the hospital that she ‘wanted to drive back again with my nurse’s uniform on to sort it out.’

Private companies build hospitals, supply drugs, and supply nurses and doctors. General practitioners have been small private businesses for decades. It is when private money operates as a market in the core business of a public entity, that exists to serve need rather than the shareholder, that risks emerge. And many people think the risks are too great and too real.

Circle’s reaction to financial difficulty was illuminating in that it demonstrated how a private company will never try to correct the mistakes it may have made; it will abandon the NHS and save itself. Private companies acting through insurance will ask their customers to pay a contribution towards the private treatment they need. These co-payments are in opposition to a health service free at the point of delivery. They will cause public money to leak from the system into insurance.

Private companies are secretive when it suits them, and achieving transparency is difficult. But the overwhelming objection to private capital in the health service is that it is a giant leech. It trains none of the professionals it uses, and pays nothing towards the equipment it needs, bought with the proceeds of fun runs, charity days, sponsored skydives and the generosity of spirit found in the wider community. Victorian doctors took ages to realise leeches did not help their patients. Neo-liberal parties, like the Conservative and Labour Parties, can’t see that the leech of private capital does not help the health service.

The coalition government passed the Health and Social Care Act 2012, which allowed NHS hospitals to raise up to half their income from private patients, created widespread conflict of interest, and raised fears for the integrity of the commissioning process for some important contracts.

Astonishingly, family doctors can now award lucrative contracts to companies providing out-of-hours services in which they themselves have a shareholding.
• In East Anglia an NHS mental health trust that is cutting services and staff has spent £1.2m in a single year on a private hospital where one of its senior consultants is a director.
• Around 600 stoma nurses work in the health service – 450 are sponsored by companies that provide the products they ask to use.
• Islington’s £300m budget has been queried after twenty doctors on the clinical commissioning group were shown to be involved with companies that the borough could be dealing with.
• Patients in York have been told NHS doctors would no longer carry out certain procedures, which however would still be available on payment of a fee.

The Conservatives will carry all this to a more malignant and advanced stage in the next parliament. Labour says it will repeal the 2012 Act but will carry on with austerity. Both parties will stick to the failed neo-liberal economics of a late capitalist society. Their overwhelming priority is to keep bond yields low and affordable, and so state spending must remain low. They both know that tax revenues will not be going up for a long time because wages are staying low. When David Cameron encourages employers to pay higher wages, it is difficult not to laugh. 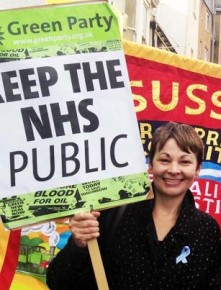 The Green Party will bring the NHS back into full public ownership. We would make the NHS truly free at the point of need. This would cost money, but would save more money than a lot of people would expect. We would sweep aside private capital, which is proven to be repellent on many levels. In particular it is repellent of social solidarity, fairness, affordability, and the nobility that comes with public service.

View all posts by jeanmacd