Our future in Europe – Natalie Bennett in Derby 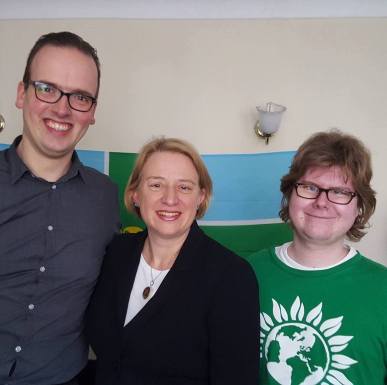 Natalie Bennett has been in Derby to speak on our future in Europe. The event took place on Thursday, 11th February 2016, from 7pm at the University of Derby. Before this meeting started, she has taken part in various activities. This included an interview with BBC Radio Derby, an interview with student radio and canvassing in Darley ward for the 2016 Derby City Council election. The main event started with a talk of approximately 30 minutes from Natalie Bennett, followed by a short speech from Marten Kats and then a question & answer session.

So why does The Green Party advocate a vote to remain in the EU? Even though we do

recognise there is a lot wrong with the European Union, it also brings many advantages. Many problems can only be tackled by cross-border co-operation. Examples are climate change, water and air pollution. Also workers’ rights need to be controlled at a European level as otherwise various countries can undercut others over the backs of workers. Harmonisation of various regulations makes it easier for small and medium businesses to sell their products in other parts of the European Union and European Economic Area. At least 3 million jobs in the UK depend on Britain’s membership of the EU. Finally, The Green Party celebrates the free movement of people. There has been a lot of negative publicity about the free movement, mainly by our right wing media. However, free movement has enriched our culture. There are roughly as many UK citizens in other EU countries as there are EU nationals in the UK. EU nationals don’t come here to claim benefits, instead they contribute greatly to our economy. It is important to make this clear in our EU referendum campaign.

We need to address the faults of the EU, but we don’t do that by walking away. Just like there is a lot wrong with Westminster, with the undemocratic voting system being the worst. That doesn’t mean that we have to give up on democracy, we need to fight to change it. It works the same in the European Union. We need to stay in it and fight for a different Europe from the inside. Europe is changing, politics is changing, a different Europe is possible as long as we don’t give up on it.

Another Europe is possible

Why the left should fight to stay in Europe

This entry was posted in Derby, Europe, Uncategorized. Bookmark the permalink.